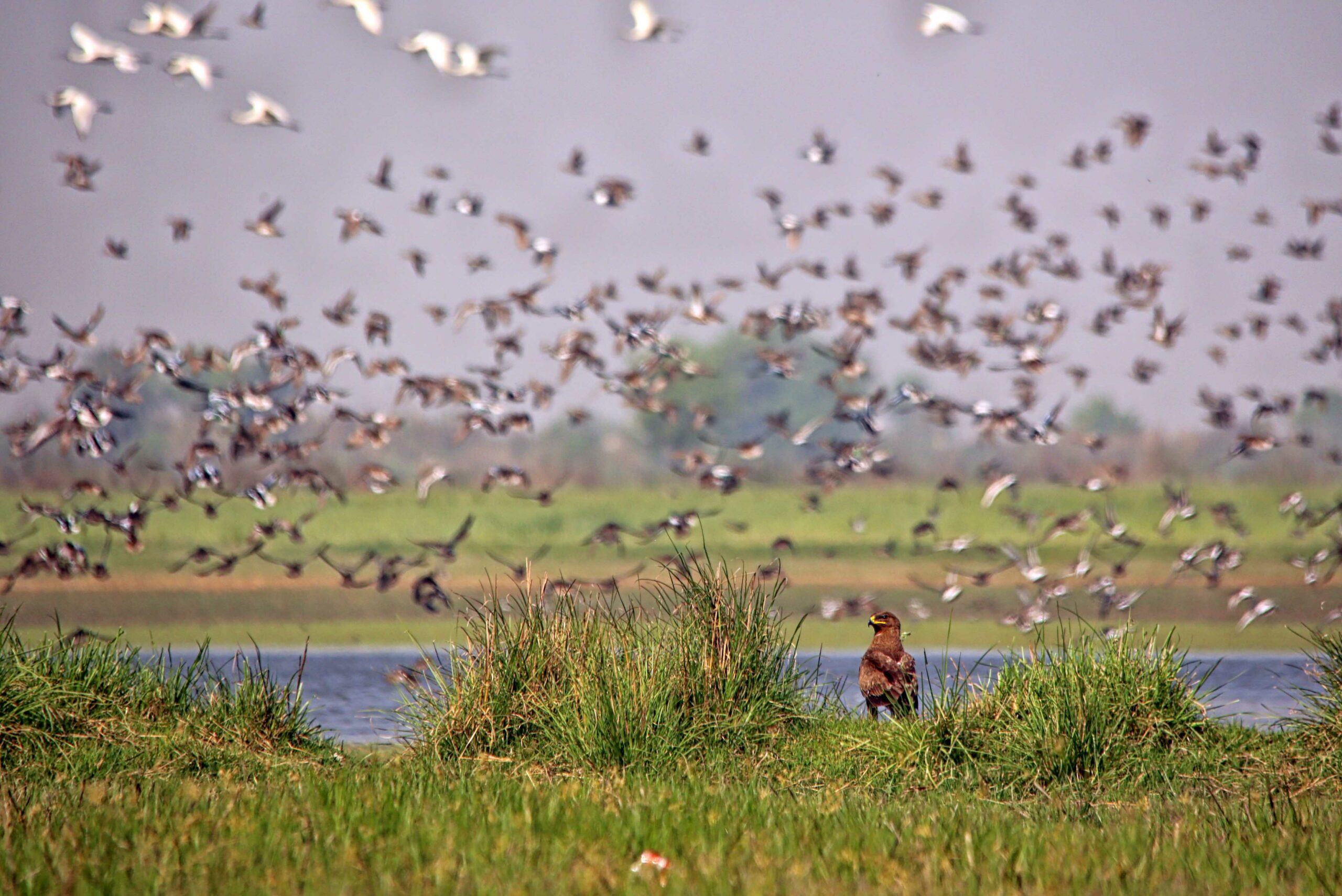 The Little Rann of Kutch (LRoK)

The ‘Little’ Rann of Kutch is a 4950 sq. km. saline desert in the Kutch Peninsula of western India that is dominated by vast salt pans, shrubby islands, seasonal nullahs, marshes and rocky hillocks or Dungars of volcanic origin. This unique landscape was originally part of the Arabian Sea. As the land separated from the sea by geological forces, it became a vast, featureless plain encrusted with salt that is inundated with water during the monsoon rains. 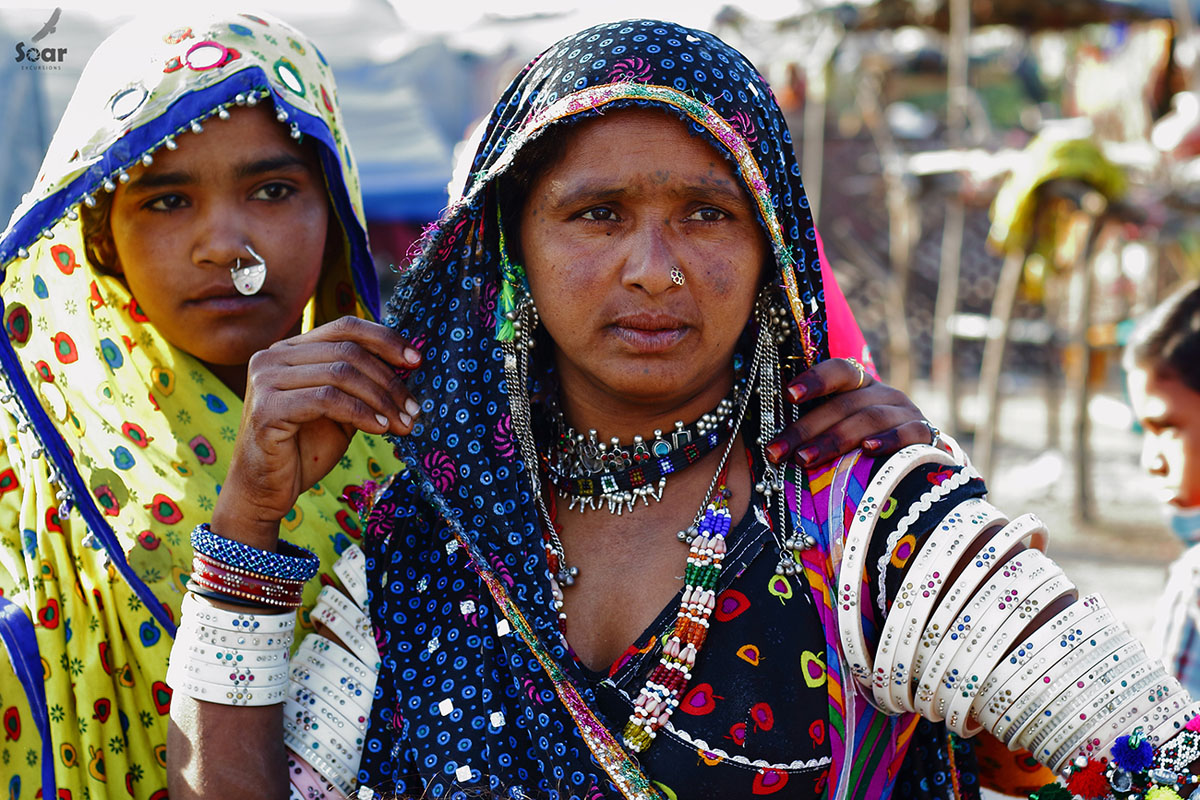 The people of the land

The people here are a mix of settled farmers and nomadic pastoralists from various tribes who visit the Rann following the cadence of the seasons, seeking rich pastures and fallow fields. Kharapat Rabaris, Mirs, Bharvads and Jat landholders form the majority of the community here. Dangasia weavers arrived with the Bharvad sheepherders to weave the wool into garments. The Agarias or salt workers live among the flats harvesting salt from their humble yet functional settlements. The arrival of the waters of the Narmada canal caused many communities to abandon their nomadic ways and settle in the fringes of the ‘Little’ Rann as agriculturalists. There are no permanent human settlers inside the Rann. 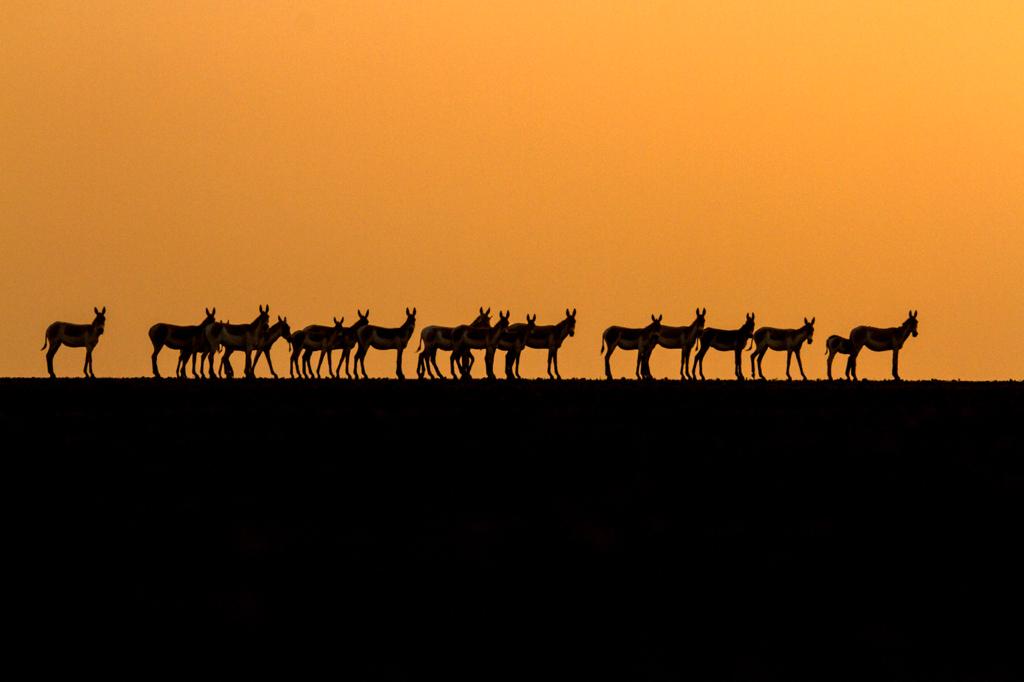 The Gudkhur and other mammals

The ‘Little Rann’ was declared as a protected area to conserve the ‘Gudkhur’or the endemic Asiatic wild ass. These beautiful chestnut brown equids roam the vast flatlands in small herds, shifting seasonally between various ‘bets’, islands on the ancient seabed that are now seen as high ground dotted with grass and scrub. The sight of these Gudkhurs galloping across the salt flats silhouetted by the setting sun is one of the iconic sights of the ‘Little’ Rann.

Hyenas, foxes, jungle and desert cats seek refuge in burrows hidden among the shrubs. Wolves, once common, can still, on occasion, be seen roaming the vast flatlands in search of prey. Nilgai or blue bull – the largest south Asian antelope – along with the smaller elegant blackbuck and chinkara gazelle occupy the edges of the Rann.  The Rann is host to a rich assemblage of smaller mammals, reptiles and insects but undoubtedly the crowning glory belongs to an altogether different class of fauna.

Taking in the ‘Little’ Rann

The Rann is a place that needs time, patience and keen observation to reveal itself fully. A walk through the shrub islands, a slow purposeful drive across the flats, climbing up one of the dungars or a conversation over chai with the herders and salt workers, can all be fruitful exercises in piecing together the puzzle that is the Little Rann of Kutch.

Birds of the Rann

There is nothing so exhilarating and uplifting than the sight of literally thousands of wild creatures packed densely on the ground or filling the air in giant flocks. The ‘Little’ Rann plays host to over 250 species of resident and migratory birds. The habitat diversity, location on a major migratory corridor and the proximity to the waters of the Gulf of Kutch have all contributed to making the Rann a veritable paradise for birds.

Most of these migrants congregate in the saline and freshwater marshes that dot the salt flats. Vast flocks of both lesser and greater flamingos dredge shallow saline waters for algae, shrimps and larvae looking from a distance like a shimmering pink haze blurring the horizon. Flocks of waders, manoeuvring in tight aerobatic formations or feeding in the shallows; ducks, geese and huge flocks of common and demoiselle cranes, some numbering close to a thousand birds or more, can be encountered while birding. Sandgrouse, sociable lapwings, houbara or macqueen’s bustard, various wheatears and larks are attracted by the grasslands. This high concentration of birds in the marshes naturally attracts a full complement of raptors – hunters of the skies. Star species like the peregrine falcon, imperial eagle, Marsh, Montague’s and Pallid Harriers – quartering the grasslands and marshes on elegant, upswept wings – Eurasian hobbys, kestrels, pallid scops owls and the low-flying short-eared owls. As much as the presence of these raptors, the fact that the Rann is a flat, treeless landscape creates a unique scenario. With few large trees to perch on, the raptors are forced to rest on the ground all night and wait for the thermals to build every morning before flying out. A dawn safari out in the Rann can thus reveal thousands of cranes, a plethora of wetland birds and a scattered population of raptors squatting on the salt flats like ‘’sitting ducks’’ before they head out on their duck hunt.

An estimated 70,000-75,000 birds nest here, a highlight being the nesting of large colonies of flamingos among the salt flats. But what really attracts the birds to this saline desert? The tidal waters from the Gulf of Kutch and the fresh water discharged from the rivers mix in the Little Rann of Kutch making it an important spawning ground for fish and prawns, including the endemic ginger shrimp Metapenaeus kutchensis. These tiny crustaceans which feed on the algae are a major food source. 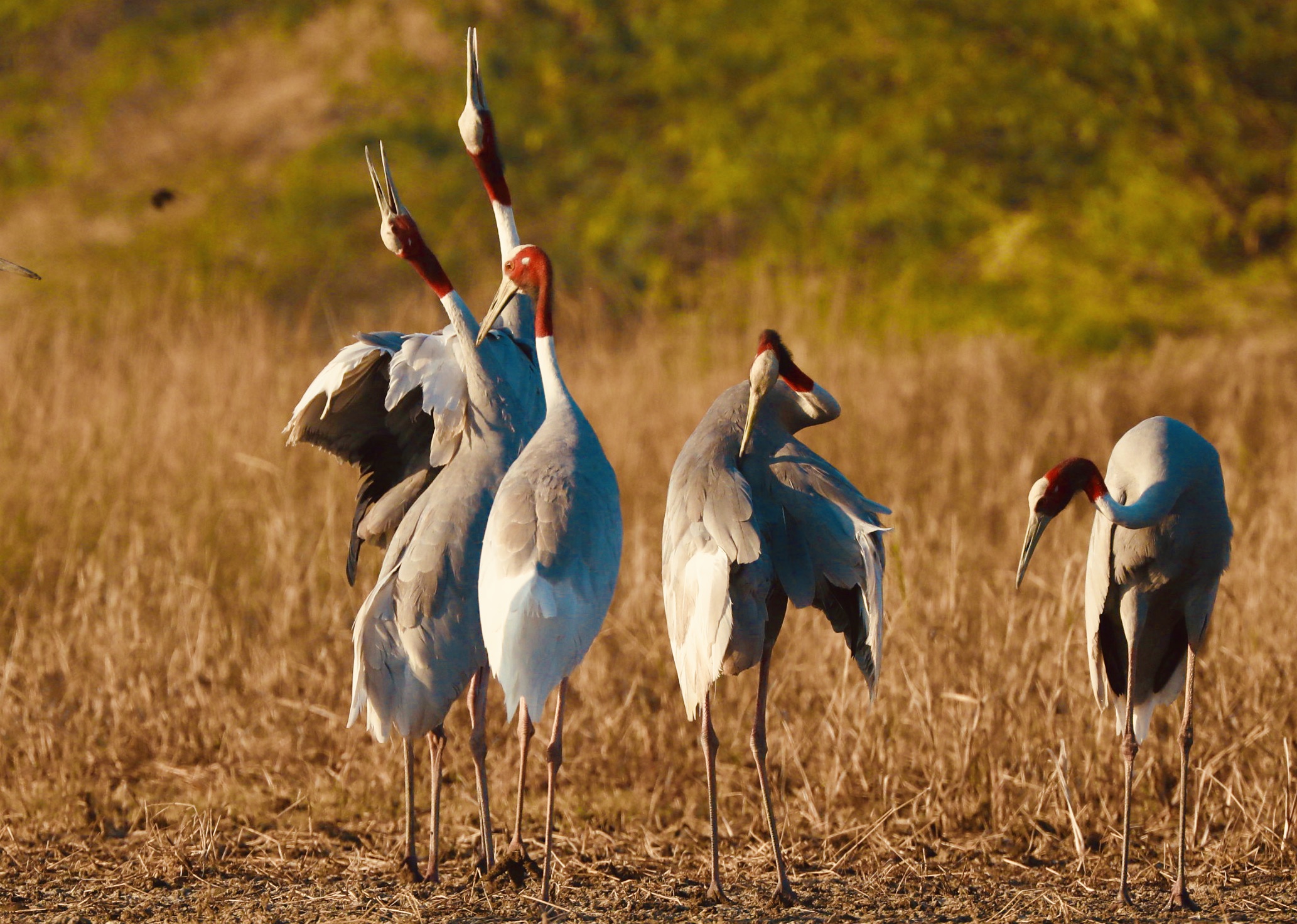 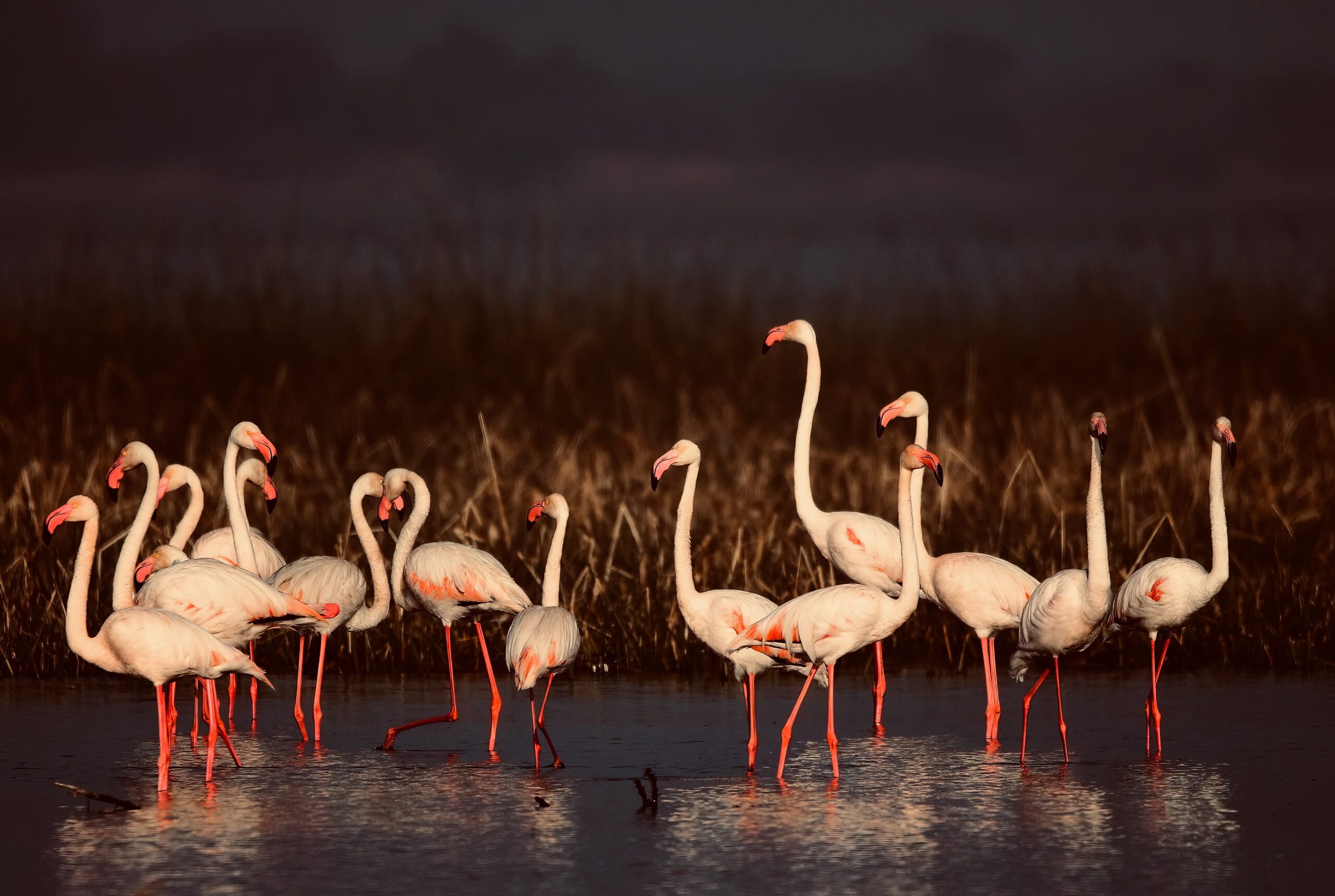 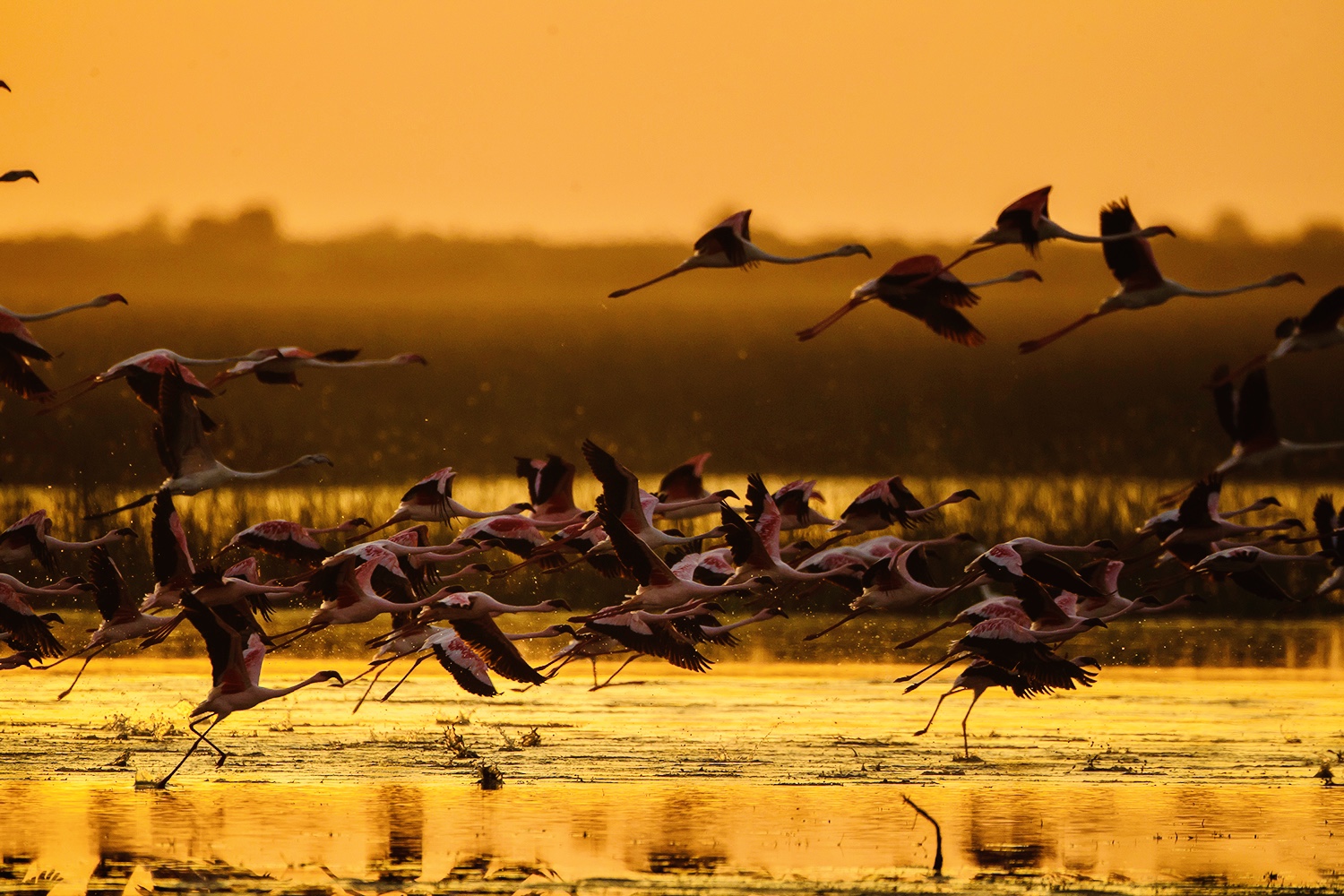 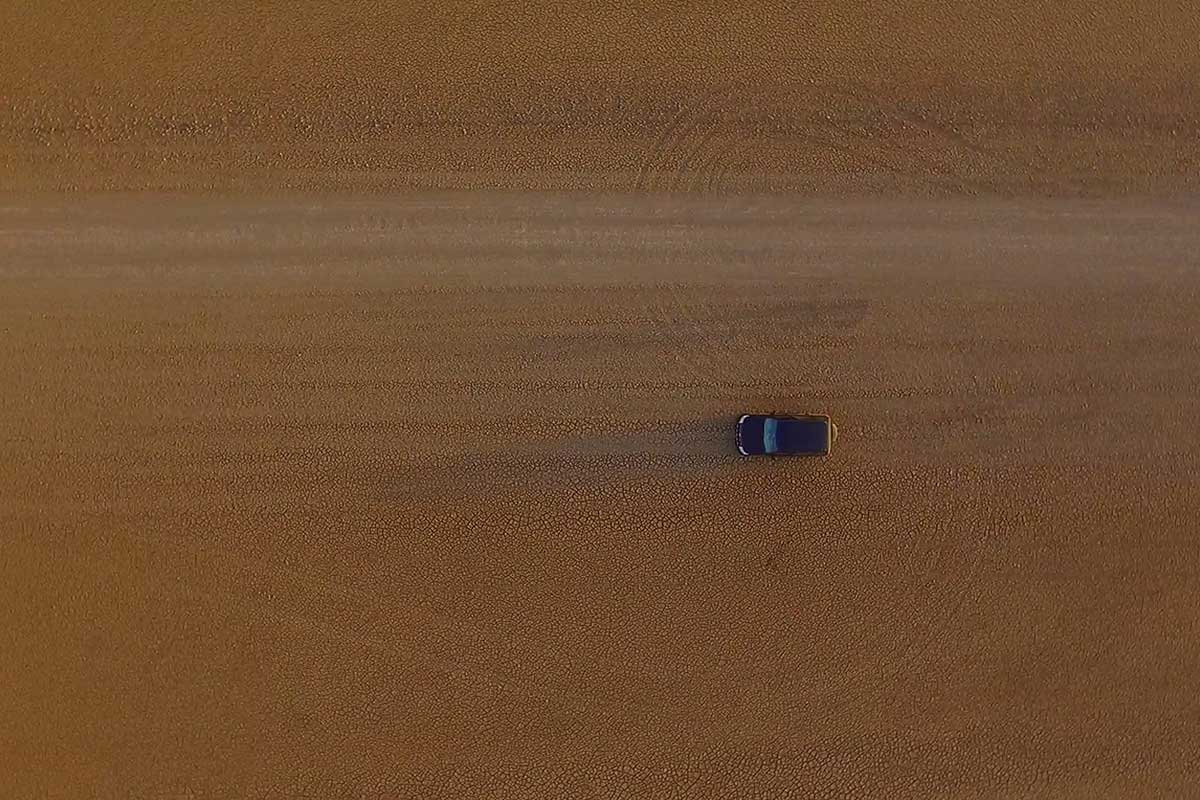 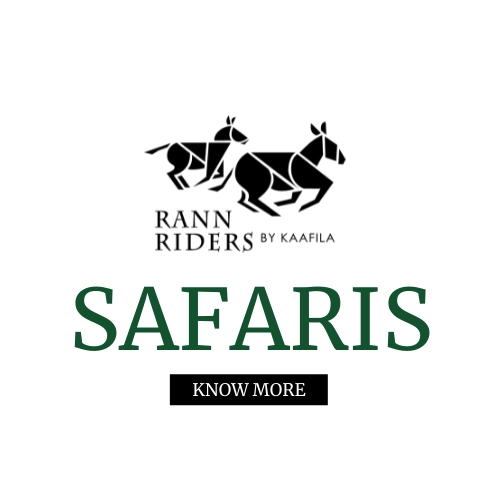